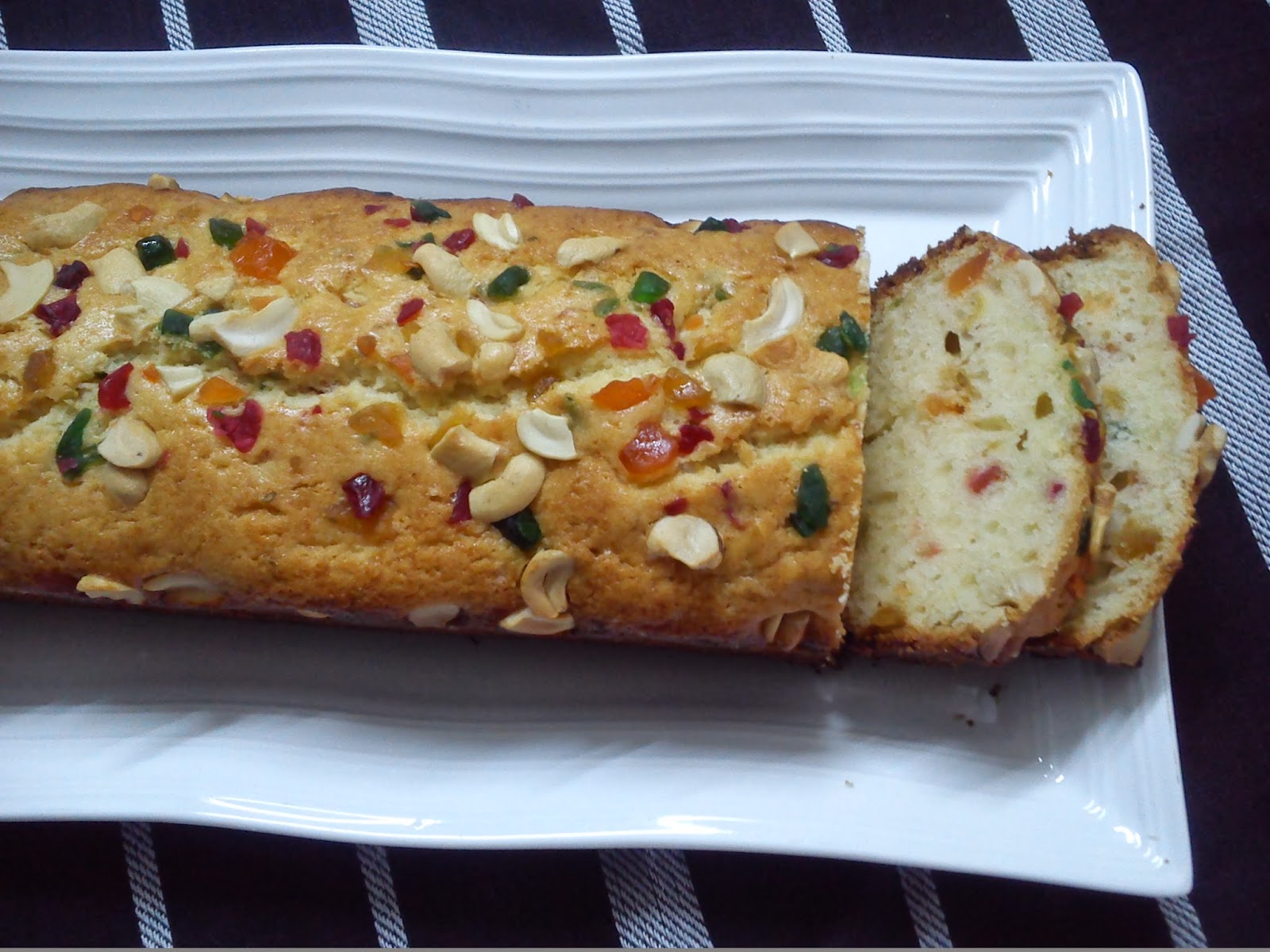 Its been a long long time that I have posted anything on my blog. I have just not been getting enough time, But Now I hope to do more and better this year....I am sharing a simple Fruit & Nut Cake here which is very easy to make and liked by everyone.... For this cake I have again used home made malai as I feel that  the  cake is more soft , moist and whiter  as compared to the butter cakes. We, at home still use full cream milk so getting  malai is no problem...but you can substitute it with butter....I am very bad at taking pictures , so U'll have to bear with me...

1. Sift the flour and baking powder togther and keep aside.
2. Cream malai/butter and powdered sugar together till it is very light and fluffy. The butter should have changed its colour at this point.
3. Add eggs one by one till the whole mixture is smooth.
4. Add Vanilla essence.
5. Fold in the flour with the mixture.
6. Add tuitty fruitty and nuts after dusting them properly in the flour. ( They r heavy and coated with sugar, so this is very important otherwise they will sink in the bottom).
7. At this point if the batter is too thick you can add 2 tbsp of milk.
7. Put them in a medium sized loaf tin and bake at 180 C for about 35-40 mins or ill the golden colour comes. 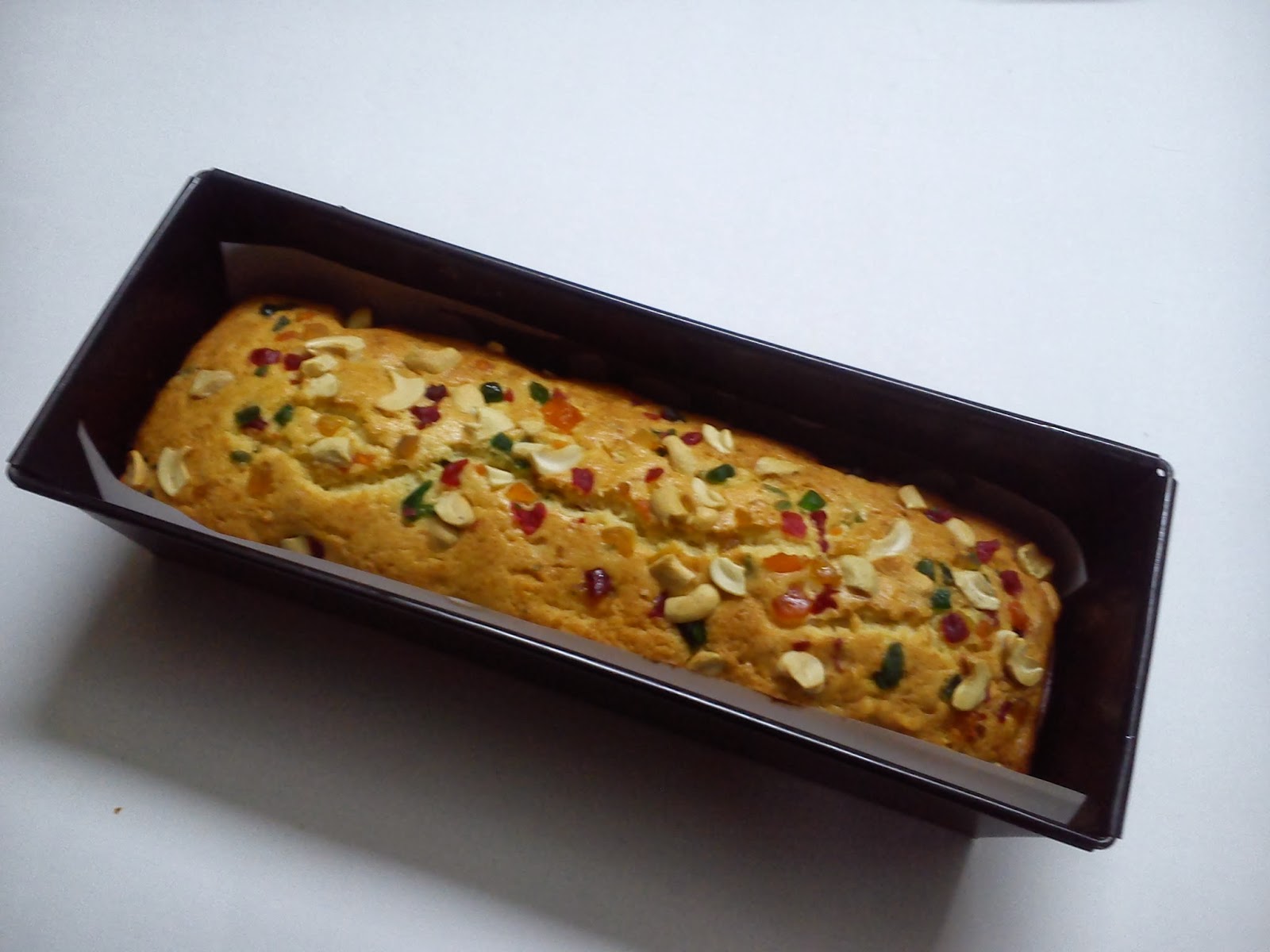 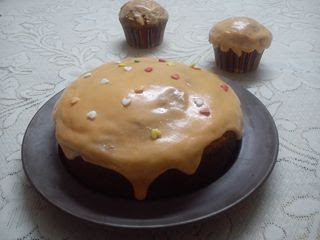 I have been making Carrot Cake since a long time but somehow never tried making the eggless version. This was the first time I made this .It was quite easy to make. The results were pretty good...Made some quick and yummy frosting with butter & cheese spread...!! The pictures are not so good as they are mobile pics  taken at night. 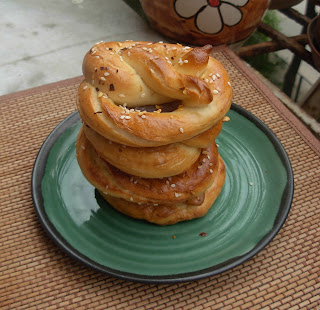 
When I first saw the challenge for We Knead to Bake of this month by Aparna, I was sure that they are very difficult to make.. so I kept on sort of delaying them, but since I had not done last month's bread also and everybody's pretzels were looking so delicious and yummy I thought of tring them myself. Making the doiugh in a food processor is very easy (This I have learnt from Aparna). Keep the dough for rising ...shape them....dip them in soda bath...and bake them.....AND they R Ready..!!! Soft, Easy and delicious pretzels....!!

1. Take the yeast and sugar in a bowl and mix them with warm milk and allow that to stand for about 5 minutes.

2. Take the flour, salt and the yeast mixture in a food processor and make the dough by adding milk to it.

3. Turn dough out onto a lightly floured surface and knead until smooth and elastic.

4.Form the dough into a ball and place in a large oiled bowl, turning to coat the dough with oil. Cover and allow the dough to rise for about 40 minutes or until doubled in size.


6.Roll each portion into an 18-inch-long rope with tapered ends. Cross one end of rope over the other to form a circle, leaving about 4 inches at end of each rope. Twist the rope at the base of the circle. Fold the ends over the circle and into a traditional pretzel shape, pinching gently to seal. Place pretzels on a lightly greased baking sheet. Cover and let rise 10 minutes (pretzels will rise only slightly). 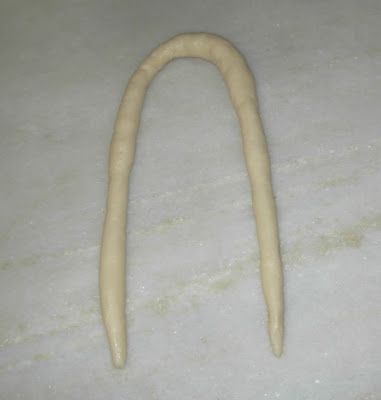 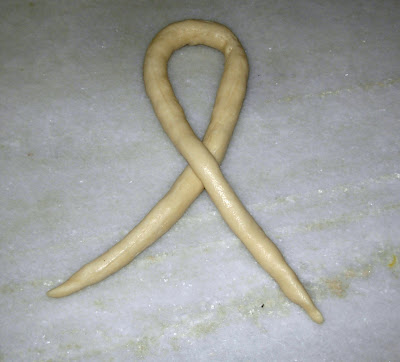 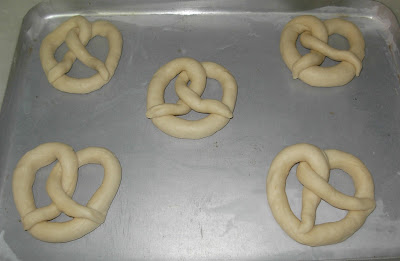 7. Put the 6 cups of water and baking soda in a non-aluminium pan and bring to a boil. Turn down the heat and simmer. Gently lower a pretzel into the simmering water. Cook on each side for about 15 seconds. The pretzel will swell/ puff up a bit. Remove from the water with a slotted spoon and place on a greased wire rack. This will prevent the pretzel from sticking to the rack. Repeat with the remaining pretzels.

8.Place the pretzels on a baking sheet sprinkled with cornmeal or semolina. Brush with milk and sprinkle with sesame seeds. Bake at 220C (425F) for 12 minutes or until pretzels are deep golden brown. Transfer to a wire rack to cool.

9. Serve warm with a dip of your choice or just plain. They’re best eaten fresh, and on the same day. This recipe makes 12 Pretzels. 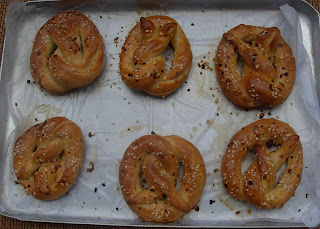 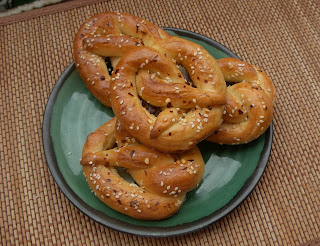 Posted by Tummy Delites at 02:22 No comments:

Email ThisBlogThis!Share to TwitterShare to FacebookShare to Pinterest
Labels: Breads, Savoury Bakes, We Knead to Bake 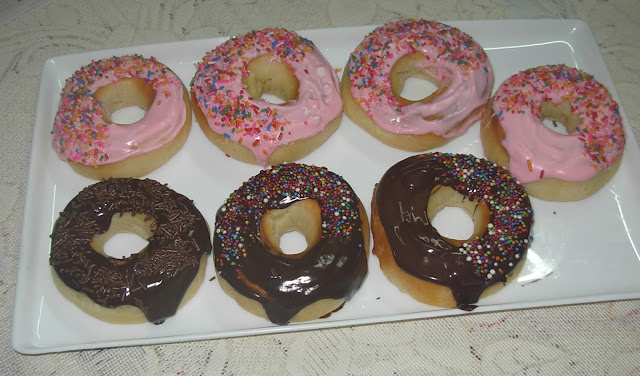 Baked Doughnuts..??????  This sounded interesting when I saw June's Month Challennge for We Knead to Bake hosted by Aparna of My Diverse Kitchen ...Though I had made doughnuts before but they were fried...& using eggs... I had to try these Baked Doughnuts....Though Last Month I was very busy with personal involvements, I tried these and they came out FANTASTIC......They were liked so much so that My son has already told his friends that his Mom would be making doughnuts for the whole class for his B'Day tom..and have been asking their favourite flavour.......!!

about 1/2 cup melted butter for brushing
1 cup castor sugar + 2 tbsp cinnamon (more or less, depending on your taste), mixed together
OR
Glaze of your choice
(I used dark & white chocolate and some sugar sprinkles)

1. Put the sugar, milk, yeast, salt and vanilla in the processor bowl and pulse to mix well.

2. Add the cake flour and 1 cup of all-purpose flour and process, adding a little more of the flour as necessary till the dough is thick and pulls away from the sides of the bowl.

3. Now add the butter pieces one at a time and process till there no large chunks of butter are left in the bottom of the bowl.

4. Now add a little more flour until your have a soft, pliable and elastic dough that is most but not overly sticky.

5. Turn the dough out onto a floured surface and knead gently until the dough no longer sticks to your hands.

6. Shape the dough into a ball and place in a lightly greased large mixing bowl., turning it to coat well. Cover with a damp towel and let it rise till double in volume. This should take about an hour.

7. Punch down the dough and roll out to a thickness of 1/2" thickness. Cut out doughnuts using a doughnut cutter or whatever you have on hand to cut out 3” diameter with 1” diameter holes. 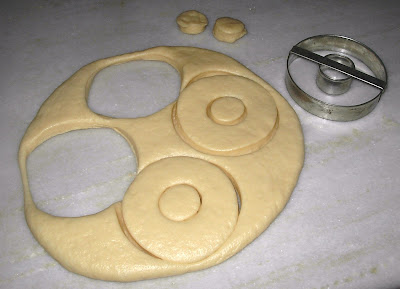 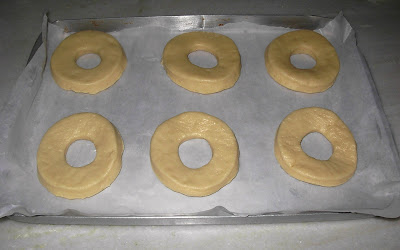 8. Re-roll the scraps and cut out more doughnuts.

9. Let them rise for about 20 minutes or till almost double in size and then bake them at 200C (400F) for about 5 to 10 minutes till they’re done and golden brown. Do not over bake them. 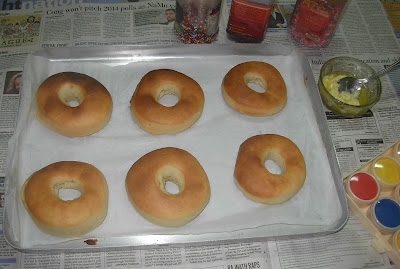 10. Take them out of the oven and immediately brush them with the melted butter and then dip them into the cinnamon sugar mixture.

11.  If glazing your doughnuts, let them cool completely and then dip one side of the doughnut in the glaze of your choice and let it set. 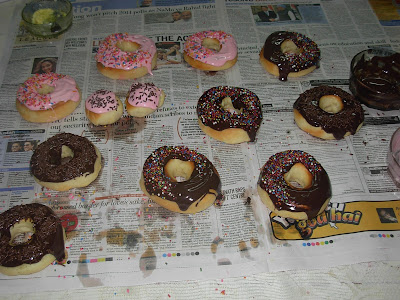 Email ThisBlogThis!Share to TwitterShare to FacebookShare to Pinterest
Labels: Breads, Sweet bakes, We Knead to Bake 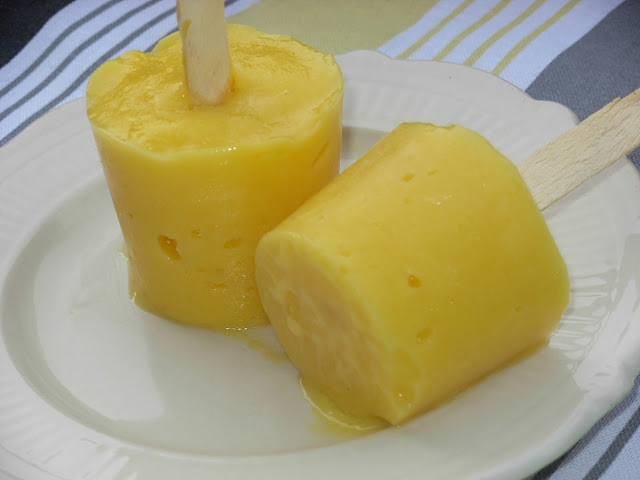 Its Summer time !! Mangoes are so much in season and I don't think theres anybody who doesn't love mangoes. This recipe is Super easy, Super Tasty and Fast Vanishing............ !!

1. Put all the ingredients in a mixer and blend till smooth .
2. Put into paper cups or kulfi molds.
3. Put and icecream stick.
4. Put them in the freezer for atleast 5-6 hours.
5. Take them out, rub your hands a little on the paper cups so that they come out easily and see them vanishing......... 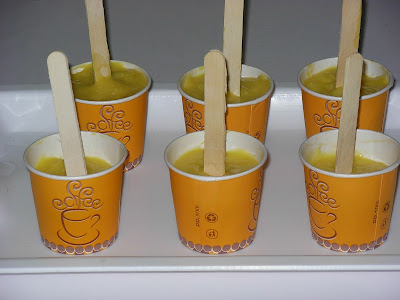 Tummy Delites
Hi! I am Deepika Garg, a passionate cook & an avid baker.